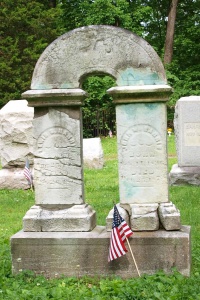 Notes:
• John and Lewis were sons of Simpson and Mary Harris.
• John W. Harris served in the Civil War (letter from Adjutant General).
• Death year of Lewis S. Harris is unknown and the marker is illegible. He was living and listed in the 1850 U.S. Census, but not in the 1860 U.S. Census.