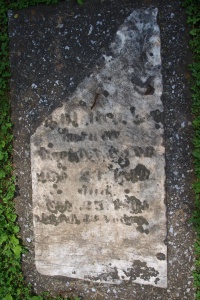 Notes:
•Hugh L. Henshaw married Cynthia Francis Patterson, the daughter of William and Assenath Piggott Patterson, on March 26, 1846. They were the parents of six children.
• Hugh Henshaw was born in a part of Virginia which is now West Virginia. He was killed when he was kicked by a horse and left his widow with five children under the age of fourteen.

Sources:
•Death: The Patterson Family History by William B. Putman, Jr., p 21.
•National Society United States Daughters of 1812, Grave Locations Project, Soldiers of War of 1812. A copy is in possession of Marilyn P. Devaney. It lists the names of children of William Patterson, their birth dates, name of spouses and dates of marriage.