The History of Cold Water Cemetery

Hidden away in a shaded spot in the center of the rapidly growing suburban area of Florissant, Missouri, is Cold Water Cemetery, a little jewel, quaint and interesting, and the very mischief to find. It is on the Old Hallsferry Road, atop a hill, and surrounded by large depressions in the land, locally called “The Sinks.” This small cemetery is on land allocated for this purpose by John Patterson, Sr., a Revolutionary War soldier. 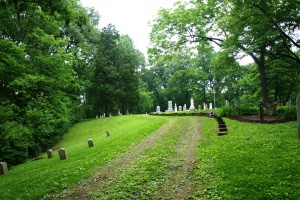 About the year 1929, a small group of interested descendants and friends of those buried in the cemetery banded together and formed the “Cold Water Cemetery Association.” Their aim was to maintain and preserve the old cemetery, ·and they devoted a great deal of time and money to this endeavor. They, however, had assigned themselves an impossible task. As the years went by, the grass and weeds grew, the headstones fell, and the fences collapsed. This was sad for in this cemetery are graves of brave pioneers who had come to Missouri for what they considered a better way of life.

After the Revolutionary War, the eastern states, with all the free land already taken up, were becoming heavily populated. Pioneers, learning of the wonders and riches beyond the horizon, left to find land of their own.

John Patterson, Sr. gathered his family together and, with many of his friends and relatives, trekked from the Carolinas, eventually arriving at the Cold Water Creek area. There are no written documents to be found about this journey to Missouri, but history tells of other similar journeys. These pioneers said a final goodbye to their homes, their friends and relatives, and to the familiar places, they were never again to see. The journey took them through unexplored territory. They battled rain, snow, heat, pestilence, privation and uncertain food. Their perils were more than we today can comprehend. But these wonderful people endured. They came to the Cold Water area, fought the wilderness, established churches, homes, businesses, and farms, and had large families. The graves in Cold Water Cemetery are a silent testimony to these pioneers, their children, and their relatives.

John Patterson, Sr. and his entourage were in the Cold Water area about the year 1797. They began to acquire land, much of which was from Spanish land grants as the area was under Spanish rule at the time. Mr. Patterson’s land grant was 1500 arpens. One could walk from the Missouri River on the north, Cold Water Creek to the south, Hallsferry Road to the west, and Bellefontaine Road to the east, and still, be on land belonging to the Pattersons. This area was called “The Patterson Settlement.” The Spanish were Catholics and this new breed of settlers; being Protestant, was difficult for the Spanish to understand. 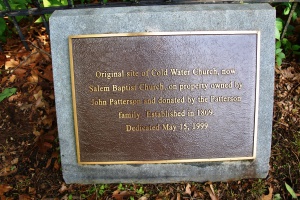 The hold-over Spanish Lt. Governor M. Zenon Trudeau (himself a Frenchman) wasn’t a bad sort and managed to overlook some of the activities of the Protestants. The area that is now Missouri changed from Spanish to French and in 1803 became a territory of the United States as part of the Louisiana Purchase. With this change in government, the laws were changed and Protestant churches ·became legal.

The first marriage in this community was that of Elisha Patterson, the son of John Patterson, Sr., and Lucy Hubbard on 9 January 1806, with the Rev. Clark hearing their vows.

Legend is that an eight-cornered Methodist church in the shape of a cross was established about 1808 and the cemetery which was to become Cold Water Cemetery was established on the circumference of the church grounds. The first documented burial was in 1830, but there must have been earlier unrecorded interments. The church disappeared; the cemetery endured.

Many of the early settlers were buried in their private cemeteries on part of their lands. With the continuing building in this area, there are now cemeteries under parking lots and paved areas. We, the Missouri Daughters, are fortunate that this cemetery is ours. 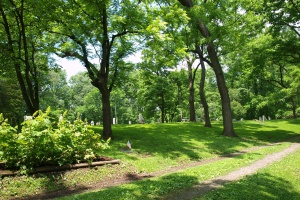 In the late 1950s, members of the Cold Water Cemetery Association and their friends decided to save the now historic cemetery. Mr. and Mrs. Ed Hume., Mr. and Mrs. O. Block Patterson·, Mr. and Mrs. John Patterson, Mr. Henry G. Poikert and his first wife Lola, Mr. and Mrs. Charles Weiderman, and others banded together for this purpose. They mowed grass, pulled weeds, patched broken headstones, and ·they, too, found this to be an impossible task. It was time-consuming, expensive, and downright hard work. Additional efforts would have to be devised to maintain this landmark.

Lola Poikert was a member of the O’ Fallon Chapter NSDAR. She decided, and the other was in complete accord, to approach the MSSDAR to see if the State Society would consider taking over Cold Water Cemetery. In 1963, Lola Poikert talked with Mrs. Walter Diggs, the Missouri State Regent (1963 – 1964) and Mrs. Claude Rowland, Honorary State Regent and Honorary Vice President General NSDAR, about this gift of the cemetery. These ladies brought the story of the unusual gift before the 1963 MSSDAR State Conference. The members had an inspection tour of the cemetery, liked what they saw, and voted to accept this gift.

Memorial Day, May 30, 1963, was the date set for the dedication of the cemetery, but the real heroine of our story, Lola Poikert, died just before the dedication and was buried in Cold Water Cemetery. She had achieved her goal, and will forever have the deep regard of the Missouri Daughters. MSSDAR and the Cold Water Cemetery Association jointly dedicated the cemetery. Mrs. Walter Diggs, representing the MSSDAR, and Mr. Henry Chomeau of the Cold Water Cemetery Association each placed a wreath on a grave. A traditional Memorial Day ceremony was established; the Veterans of Foreign Wars (V.F.W.) Color Guard, the Florissant High School Band, and the flower drop by the Civil Air Patrol have become a part of this tradition. 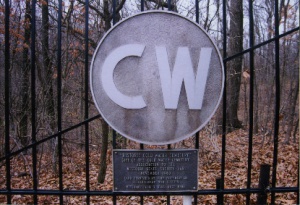 It wasn’t until November 1963, that all the legal matters were completed, and the Cold Water Cemetery became the possession of MSSDAR. “This is, Missouri Daughters, your cemetery; you own it, you maintain it, and you and members of your family can be buried there. It is the only cemetery in the United States owned by a DAR state society.”

On Memorial Day 1974, Mrs. Francis (French) Deane, Regent of the Webster Groves Chapter NSDAR, attended the ceremony at the Cold Water Cemetery. The Memorial Day ceremony followed the now established tradition. Dignitaries attended the ceremony and made speeches, among them was MSSDAR State Regent Mrs. Herbert H. White, who placed a wreath on a grave. It was an impressive ceremony, but as Mrs. Deane walked around the cemetery looking at the headstones and wondering about the people buried there, she felt there was another job that had to be done. A book about the history of the cemetery and the people buried there must be written – this was a story every Missouri Daughter should know. All of them cannot visit the cemetery in person, but they could visit by reading about it.

With this in mind, Mrs. Deane approached MSSDAR State Regent Mrs. White, who agreed that it would be an excellent project for the Webster Groves Chapter NSDAR. Written permission of the members of the Cold Water Cemetery Association Advisory Board was given for the Webster Groves Chapter NSDAR to write the history of the cemetery as a bicentennial project, and thus raise funds to help support the cemetery. All proceeds from the sale of the book were donated to the Cold Water Cemetery Association, MSSDAR. 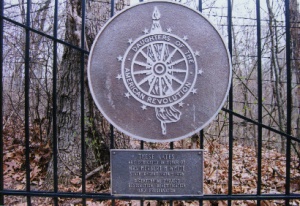 The Webster Groves Chapter NSDAR has many fine members, some of whom are excellent genealogists. At Mrs. Deane’s request for assistance on the committee to compile information for the book, Mrs. William S. (Cora) Beggs, said: “Count me in.” Others followed: Mrs. Gay J. (Florence) Gifford, Mrs. Gene (Peggy) Stroh, and Mrs. Donald (Linda) Winzen joined Mrs. Deane in researching data for the book. One of the aforementioned members of the group dedicated to preserving the cemetery, Mrs. Charles (June) Weiderman of the Cornelia Greene Chapter NSDAR, gave much encouragement in the project and permitted the use of her data on the Cold Water Cemetery inscriptions.

It was a cooperative study. The members pooled their findings at luncheon meetings in their homes. Many leads promising information merely sent them on wild goose chases. A grocery carton is full of documents.

The people buried in Cold Water Cemetery seem to be one generation or more away from their American Revolutionary War ancestors. However, only three American Revolutionary War patriots have been found to be buried there. It is rumored other American Revolutionary War soldiers were interred in the cemetery. The researchers can’t say they have or have not been; they simply do not have proof of these burials. These settlers came from Scotland, England, and France; from Maryland, Pennsylvania, Virginia, North Carolina, South Carolina, Tennessee, Kentucky, and Illinois. There may be some from other areas, but this cannot be substantiated. Deaths were from cholera, tuberculosis, lockjaw, and other ailments. Many young mothers died in childbirth, their new babies dying with them.

Heroes who fought in our wars have been buried in Cold Water Cemetery. Among them: